#1 of 5: Amazon is unmatched when it comes to online retail 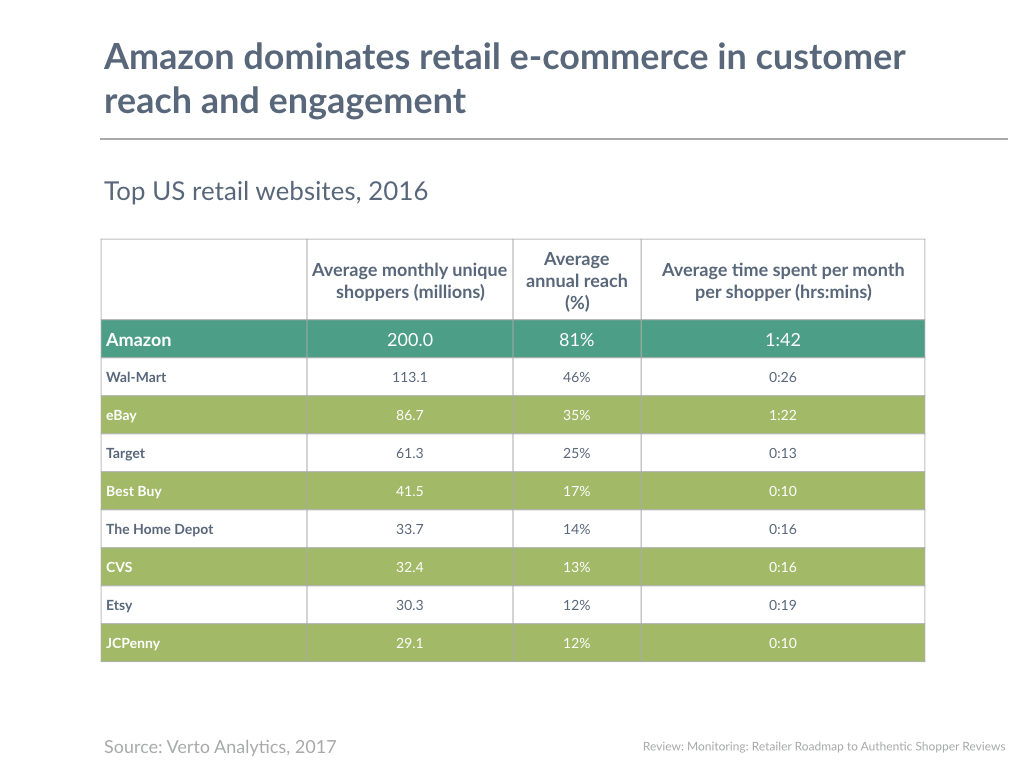 Amazon’s dominance of e-commerce is likely to continue as shoppers do not visit the site for transactional purpose only. Online shoppers are more engaged with Amazon than with any other e-commerce website. On average a digital shopper spends almost 2 hours a month browsing through Amazon, compared to less than 30 mins on Walmart. Higher engagement with Amazon is largely as a result of shoppers who research products and write reviews when on Amazon.

Amazon also has a slight advantage over Walmart in shopper demographics as it attracts a younger, more affluent cohort. Amazon shoppers are also equally like to be male or female compared to other retailers. Walmart and Target skew towards female shoppers while Home Depot and Best Buy skew male. This demographic advantage will further help Amazon in maintaining its dominance over other retailers as younger, affluent shoppers of both genders increasingly use mobile devices to research and buy products.

In an effort to catch up Amazon in online demographics and engagement, Walmart acquired e-commerce startup Jet.com in August 2016. The biggest test of this will be during holiday sales. Amazon’s dominance is most visible during the peak holiday shopping season i.e. November to December of each year. Amazon has accounted for more than a third of online purchases made during the holiday season. No other retailer has come close with Best Buy, Target and Walmart all accounting for less than 5% of the holiday season sales.

Are Negative Amazon Ratings with No Review Better Than No Feedback at All?