Fake reviews – Is it really an issue?

In a previous report, we highlighted the importance of online reviews during the shopper’s path to purchase. More than three in four US shoppers go online to read reviews. Online reviews are the second most trusted source of information behind friends and family and actually rank ahead of peer recommendation in terms of being helpful in the shopping process. 73% of shoppers rank online reviews are the most influential piece of content ahead of videos, photos and blogs that lead to conversion.

More recently there have been concerns around the authenticity of online reviews. While our previous research revealed that the presence of negative reviews helps address this concern, our latest research has found that the issue might be less severe than anticipated. More than four in five (82%) online reviews are posted by shoppers who purchased the product themselves. This matches our previous finding that more than four in five (86%) shoppers trust online reviews. Even amongst shoppers who post reviews for product they did not purchase, the majority are every shoppers who received the product as a gift from family or friends (7%), and not bloggers and online celebrities who received freebies in exchange for reviews (6%). 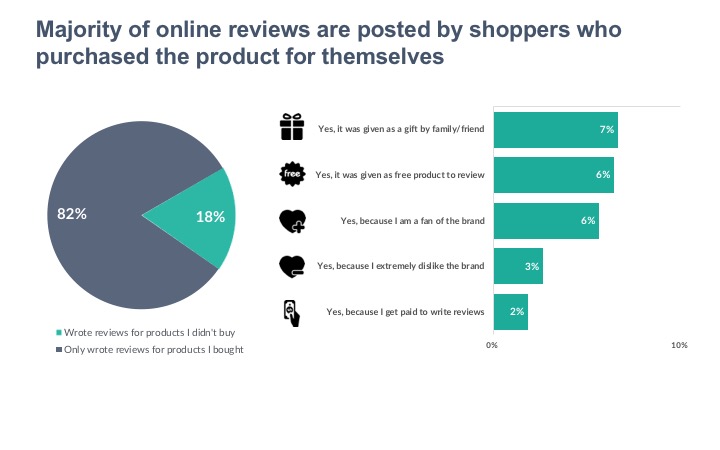 Compared to authentic reviewers, fake reviewers make up just about one in ten of all review writers. Only 2% of online reviewers said they were paid to write reviews. Another 3% said they posted negative reviews despite not having purchased the product because they extremely dislike the brand, while 6% confessed to having reviewed a product because they are a fan of the brand.

Despite the small size of fake reviewers, both Amazon and Yelp have taken legal steps to crackdown on fake reviewers. Even Amazon agreed that posting fake reviews is only limited to ‘a very small minority of sellers and manufacturers’.  We can expect fake reviews to diminish in volume and impact in the near future. In the meantime, brands should not miss out on the value they can derive from mining online reviews and generating new ones. The focus should be on finding out more about the shoppers who write online reviews and the tactics required to generate reviews that are not only authentic but also influence a potential buyer’s purchase decision.